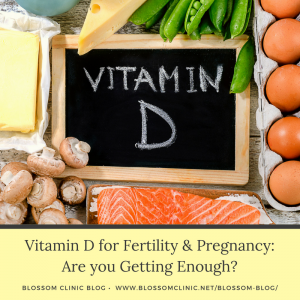 If you’re thinking about having a baby it’s strongly recommended that you have your Vitamin D level checked, especially if you’ve been trying for a while or have a history of pregnancy loss.  Your doctor can order a simple blood test to ensure you have enough of this vitamin that is so important for fertility and healthy pregnancies – for both mothers and their children.  Vitamin D is typically low in the winter and spring months and in darker northern climates.  A Vitamin D deficiency puts pregnant women at risk of developing serious health complications.

If you’re having trouble conceiving, low Vitamin D could be contributing to your fertility issues.  A low level has been associated with Repeated Pregnancy Loss and Unexplained Infertility.  It’s been found to affect implantation which can cause bio-chemical pregnancies or miscarriages. [i]. Also more research is being done on PCOS (Polycystic Ovarian Syndrome) since these women often have Vitamin D deficiency and evidence is showing that supplementation may be beneficial for egg development and regulating menstruation. [iii]. One study found a healthier increased uterine lining in women with PCOS who were given Vitamin D during their IUI cycles. [ii].

A study (published in Fertility & Sterility in 2014) of 99 women undergoing IVF (in-vitro fertilization) at USC in Southern California looked at the impact of Vitamin D on IVF cycles. The percentage of women who became pregnant was 74% in those with sufficient vitamin D levels (above 30 ng/ml), 42% in women who were insufficient (20-30), and only 35% with deficiency (below 20).  Babies were born to 59% of the women with adequate D levels (above 30) and 31% of women whose levels were below 30.  [iv]. 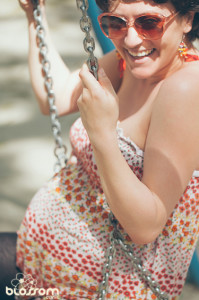 If you’re thinking about having a baby it’s strongly recommended that you have your Vitamin D level checked, especially if you’ve been trying for a while or have a history of pregnancy loss.

Vitamin D is very important for brain development.  A recent study in the Netherlands of more than 8,000 women and their children showed a clear correlation between Vitamin D deficiency and autism.  Children whose mothers tested low in their 20th week of pregnancy were more likely to have autistic traits by the age of six. [v].  Other studies have seen an increased risk of schizophrenia with inadequate Vitamin D. [vi, vii].

When mom’s Vitamin D level is too low deficiency can be present at birth.  Babies receive this vitamin through the placenta, and after birth through breast milk or fortified formula.  Babies who are solely breastfed are more at risk of having deficient Vitamin D because human milk has a very low concentration, about 1.5-3% of the mother’s level.  So, exposure to sunlight is also recommended. [viii].  An Irish study found their dark winters produced more babies born in March and April with Vitamin D insufficiency, about 46% of births during that time.  You can read more about the importance of Vitamin D during pregnancy and while breastfeeding here.

Low Vitamin D during pregnancy has been linked to small-for-gestational-age births, increased susceptibility to infections and reduced bone density. [viii].  Kids whose moms did not have sufficient Vitamin D in their 3rd trimester had more broken bones than other children.  An Australian study published in 2016 tells us that children who have a lack of D in early childhood are more prone to developing allergic disorders like asthma and eczema. [ix].

Also, it’s very important to know that pregnant women with low D are more susceptible to developing preeclampsia, a complication of pregnancy including high blood pressure and kidney problems which can have very serious consequences. [x]. Often an earlier birth by medical induction is necessary, which increases the odds of a cesarean delivery.   Vitamin D deficiency has also been associated with developing gestational diabetes, so, you definitely want to make sure your level stays within optimum range.

What Level is Best?

30 ng/ml or higher seems to be most protective.  In several studies levels of 10-20 ng/ml have been linked to disease risk.  In a 2016 study of pregnant women in Ireland a lower risk of preeclampsia and small-for-gestational-age births were seen when levels were above 30.  Also, no adverse effects were found when Vitamin D was over 50 ng/ml. [xi]. This is reassuring since many people are concerned about taking too much.  It seems it’s much more risky to not have enough.

In an English study from 2011 they reported “of 40 mother-infant pairs, 76% of mothers and 81% of newborns had a 25(OH)D below 20 ng/ml at the time of birth, despite the fact that during pregnancy the mothers ingested about 600 IU/day of vitamin D from a prenatal supplement and consumption of two glasses of milk.”

In my practice I’ve seen the levels of patients taking less than 5,000 IUs a day rise very slowly.  Higher doses are required to increase levels by 10 points or more. In our experience with patients, oftentimes 2,000-3,000 IUs a day is not enough to increase serum levels.

When are you at Risk? 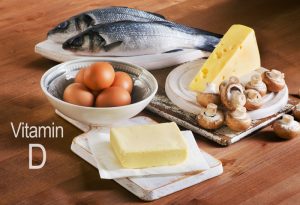 How do we get Vitamin D – Food and Sun!

Only a few foods contain substantial amounts of D, mostly cod liver oil and oily fish like salmon, tuna, trout, sardines and herring.  Farmed fish may have less vitamin D content than wild.  Egg yolk, liver, and mushrooms contain small quantities of D.  Some foods are fortified with it – dairy, soy milk, orange juice and cereals.  The amount in most vegetables is negligible.

But, interestingly, mushrooms that have been exposed to light are one of the few foods that naturally contain higher amounts of Vitamin D.  Placing them in the sun with the gills facing up for an hour will increase their D dramatically.   Research conducted at the Beltsville Human Nutrition Research Center showed that UV-treated portobello mushrooms contained 446 IUs per 3.5 ounces, compared to 10 IUs in untreated mushrooms.

You may think you’re outdoors so much you don’t have to worry, but wearing sunscreen with an SPF of 15 or higher blocks more than 99% of Vitamin D production so you can become deficient even in the summertime.  Protecting ourselves from skin cancers is important, so it’s probably wisest to take a supplement along with some moderate sun exposure of 15-20 minutes without sunscreen either earlier or later in the day.  I even recommended this when I was practicing in Southern California where I found Vitamin D deficiency in my patients, no matter what month it was.

If you find out you’re deficient in Vitamin D, it’s much better to take higher doses before conceiving than trying to correct it once you’ve become pregnant.

It’s a good idea to ask your doctor to check your level of this very important vitamin at least once a year.  Vitamin D is a vital part of reproduction, affecting the health of moms and babies.  If you find out you’re deficient, it’s much better to take higher doses before conceiving than trying to correct it once you’ve become pregnant.  At that point you wouldn’t be able to take a larger dose to bring up your level more quickly, so your baby would not be getting the Vitamin D they need.

In addition to improving fertility, Vitamin D also strengthens our immune systems, protects us from some types of cancer and helps us maintain good bone density.  It’s an easy way to support your overall health and vitality.  And, If you have any questions, we’re always here to help! 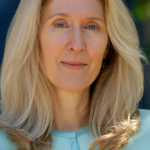 Janene specializes in fertility and pregnancy care but loves working with women in all stages of their lives, including menopause and healthy aging. With a background in energetic bodywork her treatments are deeply rejuvenating.  Janene has over a decade of experience using essential oils and is a certified Chi Nei Tsang practitioner.

ix. Vitamin D status through the first 10 years of life: A vital piece of the puzzle in asthma inception, Litonjua, Augusto A. et al. Journal of Allergy and Clinical Immunology, Volume 139, Issue 2, 459 – 461